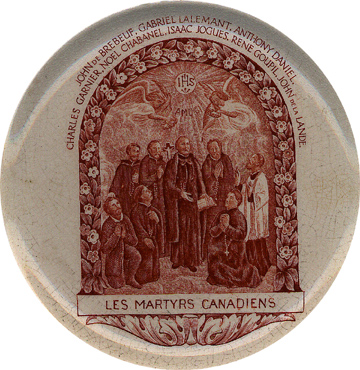 To the Greater Glory of God

Blackrobes. The title given by the Indians to the Jesuit missionaries who brought the Gospel to North America in the first decades of the 17th century. A film version of the Blackrobes' work among the Huron and Iriquois in Canada and Northeast United States was the subject of a popular film of the 1990s.

October 19 commemorates the martyrdom of six priests of the Society of Jesus and their two lay companions who worked with them tirelessly.

The first Jesuit missionaries arrived in Quebec in 1625. Initially, their work was with the French settlers and traders and evangelizing the nearby Indians. Soon they extended their missionary efforts to the Huron nation about 800 miles west of Quebec (about 100 miles north of present day Toronto.) In Huronia, the first Jesuit missionaries visited the scattered Indian villages, and were welcomed by several Indian families with whom they lived.

As the priests' missionary efforts to the Hurons proved successful, more missionaries arrived, and they decided to construct a Christian settlement in Huronia where Indian converts and the missionaries could live. In 1639, they began building Sainte Marie -- the first dwelling was a single bark-covered Huron-syle cabin that housed ten Jesuits and five workmen. Sainte Marie grew to a fortified village with a residence for 27 priests and 39 French laborers, a church, storehouses for food and equipment, a hospital, and living quarters for visiting Indians. During first years, the mission prepared hundreds of Indians for baptism and began constructing churches in the Huron villages.

But the hostile Iroquois nation to the south-east soon became a very serious threat, ambushing the supply route between Huronia and Quebec. In 1642, Father Isaac Jogues and Rene Goupil were captured on a return trip to Sainte Marie from Quebec. Father Goupil was martyred while making the sign of the cross on a child. Father Jogues had his fingers eaten and was enslaved. Though he escaped and returned to France, he came back to the North American mission -- and was martyred in 1646 (in present day New York).

By 1648 the Iroquois invaded Huronia. They destroyed several villages, including Teanostaye where Father Anthony Daniel was martyred. That winter, more than 6,000 homeless Hurons would find temporary shelter and food at Sainte Marie.

In March 1649, the Iroquois captured Fathers Jean de Brebeuf and Gabriel Lalemant about three miles from Sainte Marie, and took the priests to Saint Ignace where they tortured and killed them. By May 1649, fifteen Huron villages had been destroyed. The survivors fled to Sainte Marie or to neighboring tribes. The Jesuits, realizing that Sainte Marie could not withstand an attack from the Iriquois, burned the settlement sought safety on Saint Joseph Island with the remaining Christian Indians. There they endured a winter plagued by starvation and disease. In December 1649, two more priests, Fathers Charles Garnier and Noel Chabanel, were martyred. In the summer of 1650, the surviving priests with about three-hundred Indians left Huronia. After a forty-nine day journey, they found sanctuary in Quebec.

The North American Martyrs were canonized by Pope Pius XI in 1930. Their feast day is celebrated on October 19th in the United States. The dates of their martyrdom are as follows:

Collect:
O God, who chose to manifest
the blessed hope of your eternal Kingdom
by the toil of Saints John de Brebeuf,
Isaac Jogues and their companies
and by the shedding of their blood,
graciously grant that through their intercession
the faith of Christians may be strenghtened day by day.
Through our Lord Jesus Christ, your Son,
who lives and reigns with you in the unity of the Holy Spirit,
one God, for ever and ever. +Amen.

First Reading: 2 Corinthians 4:7-15
But we have this treasure in earthen vessels, to show that the transcendent power belongs to God and not to us.

We are afflicted in every way, but not crushed; perplexed, but not driven to despair; persecuted, but not forsaken; struck down, but not destroyed; always carrying in the body the death of Jesus, so that the life of Jesus may also be manifested in our bodies. For while we live we are always being given up to death for Jesus' sake, so that the life of Jesus may be manifested in our mortal flesh. So death is at work in us, but life in you.

Since we have the same spirit of faith as he had who wrote, "I believed, and so I spoke," we too believe, and so we speak, knowing that he who raised the Lord Jesus will raise us also with Jesus and bring us with you into his presence. For it is all for your sake, so that as grace extends to more and more people it may increase thanksgiving, to the glory of God.


Gospel Reading: Matthew 28:16-20
Now the eleven disciples went to Galilee, to the mountain to which Jesus had directed them. And when they saw him they worshipped him; but some doubted. And Jesus came and said to them, "All authority in heaven and on earth has been given to me. Go therefore and make disciples of all nations, baptizing them in the name of the Father and of the Son and of the Holy Spirit, teaching them to observe all that I have commanded you; and lo, I am with you always, to the close of the age."