Women for Faith & Family and the
Affirmation for Catholic Women

Beginnings
In September 1984, six St. Louis women gathered around a dining room table to discuss their concern that the US bishops, who had announced their intention to write a pastoral letter on the subject of "women's concerns", might not receive an accurate picture of Catholic women. The women were concerned about the impression given in the media that most Catholic women feel "alienated" from the Church, and dissent from Church teachings on issues ranging from abortion to ordination. They were aware that feminist theology had influenced many women and Catholic leaders. They wanted to do something positive to overcome this distorted image of Catholic women.

The result of the women's discussions was an eight-point statement of fidelity to Church teachings on a wide range of issues. They began to circulate the statement, called the Affirmation for Catholic Women, among their friends and colleagues, inviting them to reproduce the Affirmation and to help collect signatures.

Women for Faith & Family was formed to assist in distribution of the Affirmation, to foster greater communication among faithful Catholic women, and to be helpful in communicating their concerns to the bishops and other Church leaders. (See WFF Purposes above.)

The response to the Affirmation was overwhelming. Within a few months, 4,000 signatures had been received, and a copy of the Affirmation with a list of the signers was sent to the Bishops' Committee on Women.

In August 1985, a list of 17,000 signatures of Catholic women was given to the Bishops' Committee on Women, and WFF was invited to give testimony based on letters received from women at the Committee's hearing in Chicago. (See "The Bishops and Women" section.)

Affirmation effort spreads...
In 1985 and 1986, the Affirmation effort was extended to Canada, Australia and Holland, to provide this opportunity to women to give evidence of their fidelity to the Church. Similar efforts were begun in New Zealand and the United Kingdom in 1987 and 1988.

In October 1987, testimony based on approximately 10,000 letters from women was prepared for the US bishop-delegates to the Synod on the Laity.

WFF's testimony, along with a 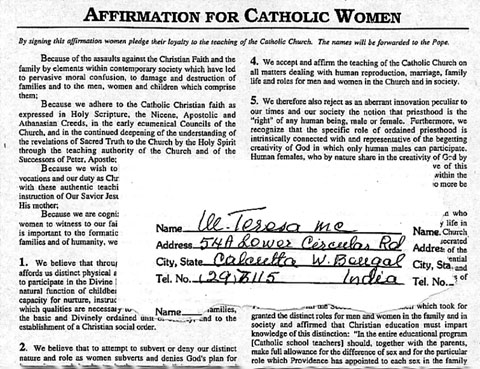 list of names of Affirmation signers was presented in Rome to Cardinal Edouard Gagnon, then president of the Pontifical Council on the Family. Cardinal Gagnon received the women's names on behalf of Pope John Paul II at a public press conference during the Synod. That list included about 30,000 from the US, plus Mother Teresa of Calcutta and all her Missionaries of Charity. About 10,000 additional names came from Holland, Australia, New Zealand, England and Canada.

The story was featured in daily newspapers in Rome.(Click here to see front page of Avvenire, October 24, 1987).

In October 1994, an updated list of more than 40,000 names of US Catholic women was presented to Pope John Paul II in Rome.

In January 1999, a list of more than 2,000 of the most recent signers was received by Cardinal Joseph Ratzinger, prefect of the Congregation for the Doctrine of the Faith outside his offices in Rome. (Click here to see picture: Cardinal Ratzinger receives new list).

The Affirmation for Catholic Women, still in circulation, has been translated into at least seven languages in addition to English. (French, Spanish, Italian, Polish, German, Dutch and Chinese.)

May I sign the Affirmation?
Yes -- if you are a Catholic woman who upholds the teachings of the Catholic Church!

New signatures continue to be received regularly. As Catholic women become aware of the challenges to their faith, both from the secular culture and within the Church, they recognize the need for their strong and forthright witness.

Affirmation signers are Catholic women of all ages, all states in life (single, married, mothers, religious), all educational and economic levels, and represent a broad political spectrum. Signers include homemakers, students, professional women (doctors, nurses, lawyers, university professors, teachers, writers, etc.) They include women whose work is in their homes, and women with full or part-time employment outside the home. About 10% of the Affirmation signers are women religious -- many from "troubled" orders.

The strong and sustained response to the Affirmation for Catholic Women is without precedent. No petition of disssent in the post-conciliar era has attracted such a response -- not even the highly publicized statement of dissent from Humanae Vitae in 1968, or Call-to-Action's "We are Church" statement in 1996-7. This is particularly significant because of the explicit nature of the Affirmation, and the "grass-roots" means of gathering signatures.

The Bishops and Women: Women for Faith & Family Archive

How can I be a part of WFF?
We warmly invite you to join thousands of other Catholic women in this simple means of taking a stand for the Catholic Church, her teachings, her tradition and her authority by signing the Affirmation for Catholic Women . You are free to reproduce the Affirmation. We hope you will send it to friends, make it available to women in your parish or community, school, home-school or prayer or bible-study groups! You may reproduce information and articles found on this site for your own use. (The site is copyrighted, so please ask permission for reprint for any other purpose.)

For more information about WFF, our activities or to donate, please contact us via e-mail, or write to us at