The Exaltation of the Holy Cross
Feast Day
September 14 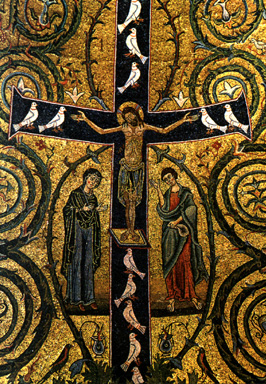 We adore thee, O Christ, and we bless thee,
for by thy cross thou hast redeemed the world.

For God so loved the world that He gave His only begotten son, that whosoever believeth in Him may not perish, but have everlasting life.

On the Feast of the Exaltation of the Cross (or Triumph of the Cross) we honor the Holy Cross by which Christ redeemed the world. The public veneration of the Cross of Christ originated in the fourth century, according to early accounts. The miraculous discovery of the cross on September 14, 326, by Saint Helen, mother of Constantine, while she was on a pilgrimage to Jerusalem, is the origin of the tradition of celebrating the Feast of the Exaltation of the Cross on this date. Constantine later built the Church of the Holy Sepulchre on the site of her discovery of the cross. On this same pilgrimage she ordered two other churches built: one in Bethlehem near the Grotto of the Nativity, the other on the Mount of the Ascension, near Jerusalem.

In the Western Church the feast came into prominence in the seventh century — after 629, when the Byzantine emperor Heraclius restored the Holy Cross to Jerusalem, after defeating the Persians who had stolen it.

Christians “exalt” (raise on high) the Cross of Christ as the instrument of our salvation. Adoration of the Cross is, thus, adoration of Jesus Christ, the God Man, who suffered and died on this Roman instrument of torture for our redemption from sin and death. The cross represents the One Sacrifice by which Jesus, obedient even unto death, accomplished our salvation. The cross is a symbolic summary of the Passion, Crucifixion and Resurrection of Christ — all in one image.

The Cross — because of what it represents — is the most potent and universal symbol of the Christian faith. It has inspired both liturgical and private devotions: for example, the Sign of the Cross, which is an invocation of the Holy Trinity; the “little” Sign of the Cross on head, lips, and heart at the reading of the Gospel; praying the Stations (or Way) of the Cross; and the Veneration of the Cross by the faithful on Good Friday by kissing the feet of the image of Our Savior crucified.

Placing a crucifix (the cross with an image of Christ’s body upon it) in churches and homes, in classrooms of Catholic schools and in other Catholic institutions, or wearing this image on our persons, is a constant reminder — and witness — of Christ’s ultimate triumph, His victory over sin and death through His suffering and dying on the Cross.

We remember Our Lord’s words, “He who does not take up his cross and follow me is not worthy of me. He who finds his life will lose it, and he who loses his life for my sake shall find it” (Mt 10:38,39). Meditating on these words we unite ourselves — our souls and bodies — with His obedience and His sacrifice; and we rejoice in this inestimable gift through which we have the hope of salvation and the glory of everlasting life.

Dying, you destroyed our death; rising you restored our life.
Save us by your cross, Christ our Redeemer.

Collect:
O God, who willed that your Only Begotten Son
should undergo the Cross to save the human race,
grant, we pray,
that we, who have known His mystery on earth,
may merit the grace of His redemption in heaven.
Through our Lord Jesus Christ, your Son,
who lives and reigns with you in the unity of the Holy Spirit,
one God, for ever and ever. +Amen.

First Reading: Numbers 21:4b-9
The people became impatient on the way. And the people spoke against God and against Moses, "Why have you brought us up out of Egypt to die in the wilderness? For there is no food and no water, and we loathe this worthless food." Then the LORD sent fiery serpents among the people, and they bit the people, so that many people of Israel died. And the people came to Moses, and said, "We have sinned, for we have spoken against the LORD and against you; pray to the LORD, that He take away the serpents from us." So Moses prayed for the people. And the LORD said to Moses, "Make a fiery serpent, and set it on a pole; and every one who is bitten, when he sees it, shall live." So Moses made a bronze serpent, and set it on a pole; and if a serpent bit any man, he would look at the bronze serpent and live.

Second Reading: Philippians 2:6-11
Though He was in the form of God, did not count equality with God a thing to be grasped, but emptied Himself, taking the form of a servant, being born in the likeness of men. And being found in human form He humbled Himself and became obedient unto death, even death on a cross. Therefore God has highly exalted Him and bestowed on Him the name which is above every name, that at the name of Jesus every knee should bow, in heaven and on earth and under the earth, and every tongue confess that Jesus Christ is Lord, to the glory of God the Father.

Gospel Reading:John 3:13-17
No one has ascended into heaven but He who descended from heaven, the Son of man. And as Moses lifted up the serpent in the wilderness, so must the Son of man be lifted up, that whoever believes in Him may have eternal life."

For God so loved the world that He gave His only Son, that whoever believes in Him should not perish but have eternal life. For God sent the Son into the world, not to condemn the world, but that the world might be saved through Him.

For God so loved the world that He gave His only begotten Son, that whoever believes in Him should not perish but have eternal life.

For God sent the Son into the world, not to condemn the world, but that the world might be saved through Him.

He who believes in Him is not condemned; He who does not believe is condemned already, because He has not believed in the name of the only begotten Son of God.

In [God ] we have redemption through His blood, the forgiveness of our trespasses, according to the riches of His grace, which He lavished upon us. For He has made known to us in all wisdom and insight the mystery of His will, according to His purpose, which He set forth in Christ as a plan for the fullness of time, to unite all things to Him, things in heaven and things on earth.

Christ Jesus, who, though He was in the form of God, did not count equality with God a thing to be grasped, but emptied Himself, taking the form of a servant, being born in the likenes of men. And being found in human form He humbled Himself and became obedient unto death, even death on a cross.

Therefore God has highly exalted Him and bestowed on Him the name that is above every name, that at the name of Jesus every knee should bow, in heaven and on earth and under the earth, and every tongue confess that Jesus Christ is Lord, to the glory of God the Father.

You know that you were ransomed from the futile ways inherited from your fathers, not with perishable things such as silver or gold, but with the precious blood of Christ, like that of a lamb without blemish or spot. Through Him you have confidence in God, who raised Him from the dead and gave Him glory, so that your faith and hope are in God.

"Consummatum est." It is completed — it has come to a full end. The mystery of God's love toward us is acomplished. The price is paid, and we are redeemed. The Eternal Father determined not to pardon us without a price, in order to show us especial favor. He condescended to make us valuable to Him. What we buy we put a value on. He might have saved us without a price — by the mere fiat of His will. But to show His love for us He took a price, which, if there was to be a price set upon us at all, if there was any ransom at all to be taken for the guilt of our sins, could be nothing short of the death of His Son in our nature. O my God and Father, Thou hast valued us so much as to pay the highest of all possible prices for our sinful souls — and shall we not love and choose Thee above all things as the one necessary and one only good?

Dear Brothers and Sisters, we are invited to look upon the Cross. It is the “privileged place” where the love of God is revealed and shown to us.… On the Cross human misery and divine mercy meet. The adoration of this unlimited mercy is for man the only way to open himself to the mystery which the Cross reveals.

The Cross is planted in the earth and would seem to extend its roots in human malice, but it reaches up, pointing as it were to the heavens, pointing to the goodness of God. By means of the Cross of Christ, the Evil One has been defeated, death is overcome, life is given to us, hope is restored, light is imparted. O Crux, ave spes unica!…

“As Moses lifted up the serpent in the wilderness, so must the Son of man be lifted up, that whoever believes in Him may have eternal life” (John 3:14-15), says Jesus. What do we see then when we bring our eyes to bear on the cross where Jesus was nailed (cf. John 19:37)? We contemplate the sign of God’s infinite love for humanity.

O Crux, ave spes unica! Saint Paul speaks of the same theme in the letter to the Ephesians…. Not only did Christ Jesus become man, in everything similar to human beings, but He took on the condition of a servant and humbled Himself even more by becoming obedient to the point of death, even death on a cross (cf. Philippians 2:6-8).

Yes, “God so loved the world that He gave His only Son” (John 3:16). We admire — overwhelmed and gratified — the breadth and length and height and depth of the love of Christ which surpasses all knowledge (cf. Ephesians 3:18-19)! O Crux, ave spes unica! …

Through the mystery of your Cross and your Resurrection, save us O Lord! Amen

**Women for Faith & Family operates solely on your generous donations!
**