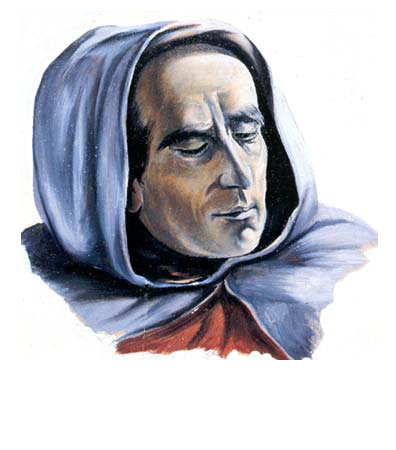 Portrait discovered in a Zacatecas, Mexico second-hand store in 1954 by Harry Downie.

On September 14, 1730, he entered the Franciscan Order. For his proficiency in studies he was appointed lector of philosophy before his ordination to the priesthood. Later he received the degree of Doctor of Theology from the Lullian University at Palma, where he also occupied the Duns Scotus chair of philosophy until he joined the missionary college of San Fernando, Mexico (1749). While traveling on foot from Vera Cruz to the capital, he injured his leg in such a way that he suffered from it throughout his life, though he continued to make his journeys on foot whenever possible. At his own request he was assigned to the Sierra Gorda Indian Missions. He served there for nine years, part of the time as superior, learned the language of the Pame Indians, and translated the Catechism into their language. Recalled to Mexico, he became famous as a most fervent and effective preacher of missions. His zeal frequently led him to employ extraordinary means in order to move the people to penance. He would pound his breast with a stone while in the pulpit, scourge himself, or apply a lighted torch to his bare chest. He was appointed superior of a band of fifteen Franciscans for the Indian Missions of Lower California. Early in 1769 he accompanied Portolá's land expedition to Upper California. On the way he established the Mission San Fernando de Velicatá, Lower California. He arrived at San Diego on July 1, and on July 16 founded the first of the twenty-one California missions, which accomplished the conversions of all the natives on the coast as far as Sonoma in the north.

In 1778 he received the faculty to administer the Sacrament of Confirmation. After he had exercised his privilege for a year, Governor Neve directed him to suspend administering the sacrament until he could present the papal Brief. For nearly two years Father Serra refrained, and then Viceroy Majorga gave instructions to the effect that Father Serra was within his rights. During the remaining three years of his life he once more visited the missions from San Diego to San Francisco, six hundred miles, in order to confirm all who had been baptized. He suffered intensely from his crippled leg and from his chest, yet he would use no remedies. He confirmed 5309 persons, who, with but few exceptions, were Indians converted during the fourteen years from 1770. Besides extraordinary fortitude, his most conspicuous virtues were insatiable zeal, love of mortification, self-denial, and absolute confidence in God. His executive abilities has been especially noted by non-Catholic writers. A bronze statute of heroic size represents him as the apostolic preacher in Golden Gate Park, San Francisco. In 1884 the Legislature of California passed a concurrent resolution making August 29 of that year, the centennial of Father Serra's burial, a legal holiday.

Collect:
O God, who by your ineffable mercy
have been pleased through the labors
of your Priest Blessed Junipero Serra
to count many American peoples within your Church
grant by his intercession
that we may so join our hearts to you in love,
as to carry always and everywhere before all people
the image of your Only Begotten Son.
Who lives and reigns with you in the unity of the Holy Spirit,
one God, for ever and ever. +Amen.

Readings: From the Common of Pastors: for Missionaries or Holy Men and Women: for religious