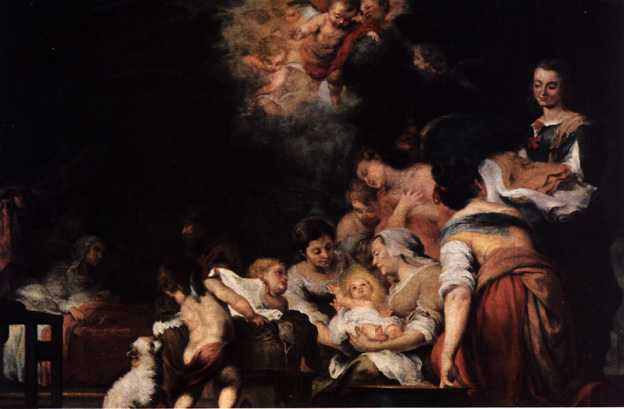 The Birth of the Virgin Mary - Esteban Murillo (Louvre, Paris)

Thy birth, O Virgin Mother of God,
heralded joy to all the world.
For from thou hast risen the Sun of justice,
Christ our God.

Destroying the curse, He gave blessing;
and damning death, He bestowed on us
life everlasting.

Blessed art thou among women
and blessed is the fruit of thy womb.
For from thou hast risen of Sun of justice,
Christ our God.

The Feast of the Birth of the Blessed Virgin Mary has been celebrated in the Church at least since the 8th Century. The Church's calendar observes the birthdays of only two saints: Saint John the Baptist (June 24), and Mary, Mother of Jesus.

John the Baptist is considered especially sanctified even before his birth. His birth to Elizabeth and Zachariah is foretold in the first chapter of Luke, and it is also recorded (Lk 1:41) that Elizabeth felt the infant John "leap in her womb" when Mary approached her soon after the Annunciation.

The birth of Mary was also miraculous. She was conceived without sin as a special grace because God had selected her to become the mother of His Son (the feast of her Immaculate Conception is celebrated on December 8). The dogma of the Immaculate Conception of the Virgin Mary, though generally believed throughout the Church for many centuries, was formally declared by Pope Pius IX in 1854.

There is nothing contained in Scripture about the birth of Mary or her parentage, though Joseph's lineage is given in the first chapter of the Gospel of Matthew. The names of Mary's parents, Joachim and Anna, appear in the apocryphal "Gospel of James", a book dating from the 2nd Century AD, not part of the authentic canon of Scripture. According to this account, Joachim and Anna were also beyond the years of child-bearing, but prayed and fasted that God would grant their desire for a child.

In celebrating the nativity of Mary, Christians anticipate the Incarnation and birth of her Divine Son, and give honor to the mother of Our Lord and Savior.

Readings of the Day

Collect:
Impart to your servants, we pray, O Lord,
the gift of heavenly grace,
that the feast of the Nativity of the Blessed Virgin
may bring deeper peace
to those for whom the birth of her Son
was the dawning of salvation.
Through our Lord Jesus Christ, your Son,
who lives and reigns with you in the unity of the Holy Spirit,
one God, for ever and ever. +Amen.

First Reading: Micah 5:1-4a
Now you are walled about with a wall; siege is laid against us; with a rod they strike upon the cheek the ruler of Israel.
But you, O Bethlehem Ephrathah, who are little to be among the clans of Judah, from you shall come forth for me one who is to be ruler in Israel, whose origin is from of old, from ancient days. Therefore he shall give them up until the time when she who is in travail has brought forth; then the rest of his brethren shall return to the people of Israel. And he shall stand and feed his flock in the strength of the LORD, in the majesty of the name of the LORD his God.

Now the birth of Jesus Christ took place in this way. When his mother Mary had been betrothed to Joseph, before they came together she was found to be with child of the Holy Spirit; and her husband Joseph, being a just man and unwilling to put her to shame, resolved to send her away. But as he considered this, behold, an angel of the Lord appeared to him in a dream, saying, "Joseph, son of David, do not fear to take Mary your wife, for that which is conceived in her is of the Holy Spirit; she will bear a son, and you shall call his name Jesus, for he will save his people from their sins." All this took place to fulfil what the Lord had spoken by the prophet: "Behold, a virgin shall conceive and bear a son, and his name shall be called Emmanuel" (which means, God with us).

Family Observance of the Feast of the Birth of Mary

Mary's Birthday Cake
All children love birthday cakes -- so today, let's make a birthday cake for the Blessed Virgin Mary. A white layer cake or angel food cake would be appropriate, with white icing and blue icing for trim (white is a symbol of purity; blue symbolizes fidelity, and is a color especially used for Mary). We suggest letting the children help with the decorations, if possible. If you have a small statue of Mary, it could be placed in the center of the cake, which can be surrounded by 10 candles -- one for each "Hail Mary" prayer in a decade of the Rosary. (If you don't have a little statue, you can write Mary's name on the cake in blue icing.)

At the end of the evening meal, each child could take turns lighting the 10 candles as the whole family prays together a "Hail Mary" for each candle, ending with the Lord's Prayer.

If the children are too young to light candles, mother could light the candles, then the adults could pray one Hail Mary at the end, just before the cake is cut. After eating the birthday cake, the prayer below could be said (this prayer, the concluding prayer from "Matins" of the Divine Office, could also be said with the children at bedtime).

Lord God,
the day of our salvation dawned
when the Blessed Virgin gave birth to your Son.
As we celebrate her nativity
grant us your grace and your peace.
Through Christ our Lord, Amen.

The ANGELUS and the LITANY of the Blessed Virgin Mary

If your family doesn't say the Angelus regularly before the evening meal, this would be a good day to introduce it. (Then say it on all Feasts of Mary and every day during the penitential seasons of Advent and Lent.) Click here to see the Angelus that you may print out for your family. (E-mail us or write to Women for Faith & Family, PO Box 300411, St. Louis, MO 63130, for copies of an Angelus "holy card".)

School-aged children could begin to learn the traditional Litany of the Blessed Virgin Mary. A good time to say the litany together might be after homework is finished in the evening, just before bedtime. A litany is an ancient form of prayer read or chanted by a group, with a leader saying the versicles, and the rest of the group saying the responses.

Birthday Books
This would be a good time to get out the children's "baby books", which usually need updating. Go through the birthday book with your child, and do some reminiscing. Each child could make a drawing of their idea of baby Mary and her family, which could be pasted in their own birthday book as a memento. (Don't forget to have them put their name and age on the pictures!)

Other ideas...
If you have a nice statue of Mary, or a "Mary shrine" in your home, it would be appropriate to decorate it with flowers and candles today, in celebration of Mary's birthday. The family can gather around it during the reciting of the litany or other prayers -- and conclude by singing the lovely hymn, Mary the Dawn. (Click on the title here to see both the words and music to this hymn.)

Your birth, O Virgin Mother of God, heralded joy to all the world.