The Holy Trinity by Masaccio 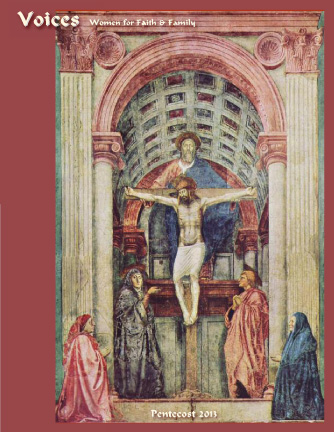 The famous fresco on our cover — of the Holy Trinity with the Virgin Mary, Saint John the Evangelist, and donors — is the work of the first great painter of the early Italian Renaissance period known as the Quattrocento (1400s). Tommaso di Ser Giovanni di Simone, known as Masaccio (“messy Tom”), was born December 21, 1401, and died in 1428.  He is known for his innovative realism and use of perspective. The Holy Trinity fresco, ca. 1427, is in Santa Maria Novella in Florence, a Dominican church.

The figures are life-size and executed with remarkable realism. The linear perspective is also innovative: with its focal point at the foot of the cross, and radiating from it, it creates the architectural space in which the members of the Trinity and the Virgin and Saint John are located, with the donor figures kneeling outside the coffered niche. God the Father is standing — not floating — on a ledge behind the cross.  Mary faces the viewer and gestures toward her crucified Son, inviting us to look at Him — a gesture that suggests her role as an intercessor. — hhhitchcock