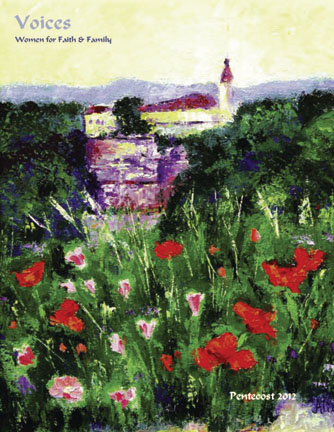 Poppies on the Cliffs Near the Ancient City Rocamadour, 2011, acrylic on canvas by Alexandra Kassing (1967-)

Letters to the Editor -- Kudos | Thanks to a Special Mother

Inside Voices: Be Not Afraid! -- by Helen Hull Hitchcock

Religious Liberty and the Rights of Conscience -- by Sister Agnes Mary Donovan, SV

Voices Young Writer Award: The Eucharist and the Priesthood -- by Robby Gillmore

Bioethics Watch: Then and Now: The Descent of Ethics -- by Nancy Valko, RN

The War on Conceiving and Bearng a Child - Or, Why Can't a Woman be More Like a Man?-- by Margaret Whitehead

Will the "Woman Vote" Be Decisive? -- by Sheila Liaugminas

Would You Go to Jail - With Your Bishop? -- by Julianne Wiley

The Commodification of Women and Children -- by Mary Jo Anderson

Pentecost -- from the Novena to the Holy Spirit

The Vocations Project -- by Joanna Bogle

Vocations: The Gift of the Love of God -- Pope Benedict XVI's Message for the 49th World Day for Vocations, April 29, 2012

Poppies on the Cliffs Near the Ancient City Rocamadour, 2011, acrylic on canvas by Alexandra Kassing (1967-)

The ancient French city of Rocamadour is a historic pilgrimage site high on a rocky plateau overlooking the Alzou valley, about 100 miles north of Toulouse. For many centuries it has been a major center of pilgrimage for travelers on their way to the more famous Santiago de Compostela in Spain.

According to legend, Rocamadour was the home of Zacchaeus of Jericho — the man who climbed a tree in order to see Jesus (Lk 19:1-10) — also known locally as Saint Amadour, “lover of rock” (roc amator). He is believed to have died ca. 70 AD and is thought to be buried here. According to local legends, he was also the husband of the woman called Veronica, who wiped the face of Jesus on the road to Calvary.

Zacchaeus is also said to have brought with him to Rocamadour a statue of the Black Virgin, to which many miracles are attributed — though the statue likely dates from the 9th century.

There are 216 steps on the Grand Escalier, the stairway that leads to the top of the high, rocky plateau on which the Chapel of Our Lady of Rocamadour and several other church-shrines of Rocamadour’s Cité religieuse are located. As an act of penance, pilgrims often climbed the entire flight of steps on their knees.

The shrine eventually became so famous that kings and bishops began granting special privileges to those who made the pilgrimage to Rocamadour. Pilgrims to this shrine include Saint Bernard, Saint Dominic, Saint Louis IX, King of France, and perhaps Charlemagne, on his way to battle the Moors in Spain. Among famous 20th-century visitors was the composer François Poulenc, who, inspired by the statue of the Black Virgin, composed Litanies à la Vierge Noire.