The Eucharist and the Priesthood 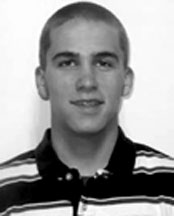 Robby Gillmore, age fifteen, is a ninth-grade home-schooled student, enrolled in Kolbe Academy. Robby is the sixth oldest of twelve children. He is an Eagle Scout, active in his troop, and very active in Lifeteen at his parish, Sacred Heart, in Warner Robins, Georgia. Robby is a member of the Teen Council, and served on the Diocesan Youth Conference Planning Committee. This summer Robby will travel to Guatemala with his older brother, who is entering the seminary this fall. He is interested in learning more about the work his brother did for a two year mission there with the God’s Child Project. Next summer Robby plans to serve in the Service Corps at Catholic Familyland in Bloomingdale, Ohio, where his other two older brothers serve as members of the Catholic Corps Men.

He has a deep devotion to the Blessed Sacrament and hopes to serve as a Lifeteen Missionary before a probable entrance into the seminary.

Much speculation has been directed at the question of whether those hosts (or “wafers”) and wine, both called the Holy Eucharist, seen at Catholic Mass, are just a representation of the Last Supper or are truly the flesh and blood of Jesus Christ, and if the latter is true; how can that be possible? On this train of thought, many have also questioned what the priesthood is in relation to the Eucharist.

The word “Eucharist” means literally “thanksgiving,” which means that “the Liturgy of the Eucharist” is “the ritual of thanksgiving” because the word “Liturgy” means “ritual,” or “form of worship.” The use of bread and wine as a gift, sacrifice, or act of giving thanks finds its origin in Genesis1 where Melchizedek, the king of Salem (early Jerusalem) brings them out after Abram’s (Abraham’s) victory with a blessing. After that, they were offered as sacrifice among the first fruits of the earth as a grateful acknowledgement to the Creator.2 The practice is then carried down as a solemn act through the events of the original Passover,3 the manna in the desert,4 when the priests of David’s time consecrated bread,5 and the annual Festival of Unleavened Bread, down until the time of Jesus.6

That is when the words of the prophet Malachi took effect: “because the Israelite priests have profaned the Altar of God, offering blind, lame and sickly animals, God will establish another priesthood, not from the Jews alone, but from all nations; and another sacrifice, that will be offered up not in Jerusalem alone, but throughout the entire world.”7

Jesus instituted the Eucharist at the Passover meal with His disciples where He blessed the bread, broke it, and called the Eucharistic bread His body; the same body that hung on the cross the very next day.8

The Eucharist that we receive may look and taste like an unleavened wafer, and so it was at the Last Supper, but this makes it an undeniable fact that the Eucharist is a physical object. The fact that it is a physical thing means that after we eat it, it is broken up and absorbed into our bodies. Now, since Jesus is true God and true man, His Godly Spirit is His human body, with no distinction for they are one and the same. When the priest blesses and consecrates the hosts at Mass and Jesus’ Spirit is breathed upon them, they become one with His Spirit; they become one with His Flesh: and so they are His Flesh. When we eat the Eucharist, the bread that has become Christ’s flesh, we physically absorb Christ into our bodies and His Spirit is in full union (hence the word communion) with us both bodily and spiritually.

There have been many accounts of Eucharistic miracles in which certain priests doubted the real presence of Jesus in the Eucharist. The miracles happened after each doubting priest spoke the solemn words of consecration at Mass and the bread and wine physically turned into a circle of Christ’s flesh and a cup of Christ’s blood. One of these is the Miracle of Lanciano, which took place around 700. In 1971 a physician reported his research that concluded that the “flesh” was muscular tissue of the heart wall of a human with an AB blood type and the blood came from the same origin.9

Since the Eucharist is truly the flesh and blood of Jesus Christ, the Mass is Heaven on earth. Heaven is a state of being (sometimes referred to as a place) in which a person is in total union with God and those others who are also in Heaven; in Heaven a person is joined to the hosts, or inhabitants (including God), of Heaven to be one with them. So when we receive the Eucharist at Mass, we are in heaven … on earth;10 that is why the Mass, the Eucharist, is called the Source and Summit of our Catholic Faith.11

All other Sacraments are bound or tied into the Eucharist. They issued forth from it and they point back to it as the most lofty Sacrament. Heaven descends upon earth after the priest at Mass speaks the words of consecration. At that moment Jesus’ spirit enters the hosts through the power of the Holy Spirit and is united, outside of the earthly realm of time, to His body that hung on a cross 2000 years ago.

In order to believe in this Sacred Mystery, we must put our faith in God. In Genesis, Chapter 15, it says that: “Abraham put his faith in the Lord, who credited it to him as an act of righteousness.” Righteousness means “to be in accordance with the standards of morality, justice and uprightness”, and this is necessary in order to be in Heaven. No man who has mortal sin on his soul can be in union with Christ, for such sin is the outright rejection of Christ, and to attempt union with Christ by receiving Holy Communion while in the state of sin is to sin again by desecrating the Eucharist.

That is why we cannot allow sin to get in the way and separate us from this union. In Mark 10:9 we are told “Therefore what God has joined together, let no one separate.” Through sin, we enable Satan to separate us from God and we make ourselves unworthy to be joined to Him. Therefore, a Catholic must receive the sacrament of Reconciliation before receiving Holy Communion if he has mortal sin on his soul. If we truly believe in this Sacred Mystery of the Holy Eucharist, it will show in our behavior toward it. All we must do is keep in mind that the Eucharist is truly Jesus, the King of the universe, and reverence and homage for Him and His Sanctuary will come naturally.

Most importantly, however, we must strive to communicate with Him, especially before and during the Mass. Saint John Vianney also said, “When we go before the Blessed Sacrament, let us open our hearts; for our good God will open His. We shall go to Him and He will come to us; the one to ask, the other to receive. It will be like a breath from one to the other.”14

Therefore, “If the priest realized what he was, he would die … not of fright, but of joy”15 because it is through him that Jesus’ Spirit descends on the bread and wine to make this glorious Sacrament possible. He is the link from God to the faithful because he brings God to the faithful and he brings the faithful to God. “The priesthood is the love of the heart of Jesus,” as Saint John Vianney said, and we know that the heart of Jesus is the Eucharist and since the Eucharist becomes united fully to the faithful, we, the faithful, are at the heart of Jesus. Jesus looks upon us as His treasure for He says in Luke 12:34 “For where your treasure is, there your heart is also.”16 So essentially, the priesthood is the love of the Eucharist and of all God’s people, even those who deny Him. Yes, Jesus loves all humanity, even though our sins hurt Him, for with His sacrifice on the cross, He tells us “What is love without suffering and sacrifice?” He loves and treasures all of humanity.

Christ chose to suffer agony by dying on the cross to show His great love in a way that merely the means of His death would allow humanity to see the magnitude of His sacrifice in a solid and easily recognizable form.

Jesus has a dual nature as God and man, and this is how He Himself is a bridge from God to man and man to God. When a man is ordained a priest, he acts in the person of Christ and thus becomes that bridge with Christ. For it is through the priest, acting in the person of Christ, that the Liturgy of the Eucharist — or the Ritual of Thanksgiving — results in the flesh of Jesus Christ being made present at every Mass eternally (outside of all bounds and relations of time).17

And it is through the priest, acting in the person of Christ, that the Church witnesses a man and a woman being joined together in the Sacrament of Matrimony for the procreation and education of offspring who will be raised to share also in the common priesthood of Christ through Baptism.20

We must keep in mind though, that “Only Christ is the true Priest, the others being only His ministers,”21 however to be only His minister is a high calling in and of itself, because by being selfless enough to serve and unconditionally love the other members of the ministerial and common priesthoods, one shares in the same ministry that Christ does. As to the laity, it can be said: “In the Church, there is diversity of ministry but unity of mission.”22

Together as Catholics, “We reject Satan, and all his works and all his empty promises. We believe in God, the Father Almighty, creator of Heaven and Earth. We believe in Jesus Christ, His only Son, our Lord, who was born of the Virgin Mary, was crucified, died, and was buried, rose from the dead, and is now seated at the right hand of the Father. We believe in the Holy Spirit, the Holy Catholic Church, the communion of saints, the forgiveness of sins, the resurrection of the body, and life everlasting. This is our Faith, this is the Faith of the Church, we are proud to profess it, in Christ Jesus our Lord.”23