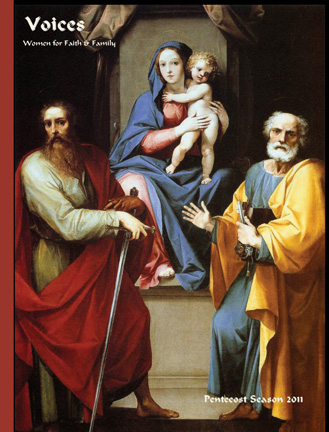 Inside Voices: Pray without ceasing - 1 Thessalonians 5:17 - by Helen Hull Hitchcock

Bioethics Watch -- US Bishops Issue Statement on Assisted Suicide: "To Live Each Day with Dignity" -- by Helen Hull Hitchcock

Help, Lord, the souls that thou has made -- Blessed John Henry Newman (hymn)

Excerpts from the Order of Mass

Mary, Daughter of Zion and Mother of the Church - by Lawrence Feingold

Christian responsibilities in the public square -- Politics and the Devil - by Archbishop Charles J. Chaput

Bishops, Theologians, and the Quest for Truth -- Statement of Women for Faith and Family

About the Cover: Giuseppe Cesari, a Roman painter of the early 17th century, was patronized by both Pope Clement VIII and Pope Sixtus V. The style of painting of this period is called “mannerist” — a style characterized not by true realism, but by a “mannered” (dramatized or exaggerated) interpretation of reality. Michelangelo Buonarroti, who painted the Sistine Chapel ceiling, is perhaps the best — and best known — of the early mannerist painters. Cesari had a studio in Rome, in which the young Michelangelo Merisi da Caravaggio worked in 1593-94, before he became one of the most famous artists of the baroque period.

In this painting, the enthroned Madonna, wearing the traditional blue robe and holding the infant Jesus, is flanked by Saint Paul (left), wearing a red robe with his characteristic long dark beard and his usual attribute in paintings and sculpture — the sword by which he was martyred. Saint Peter, in the golden robe and with his stubby white beard, is holding a Bible and the key that symbolizes his leadership of the Church.

The gestures of both saints’ arms and hands lead toward the Blessed Mother and her Son, an emphasis underscored by the folds of cloth and the primary colors of the figures’ robes, which contrast dramatically with the dark and neutral background. The angle of Saint Paul’s sword also guides the eye to the Mother and Child. Another characteristic of mannerist painting is the use of geometric shapes in the composition — here, the almost perfect equilateral triangle formed by the bent arms of the saints with the face of the Virgin as its apex.