The Four Marks of the Catholic Church 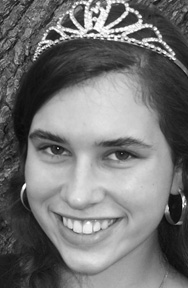 Faith is fifteen years old, and in the ninth grade at St. Joan of Arc Academy. She is the eldest daughter of Tim and Paula Nemec, and loves life in Taylor, Texas with her four younger siblings. She enjoys creative writing, basketball, spending time with her family and friends, water sports, photography, and attending youth retreats with her church.

Many people misunderstand Catholicism, some of my family and friends included. So when I heard about this contest, it became an inspiration for me to start researching more about my faith, so that I can calmly and confidently answer the religious questions that people I know may fire at me.

I started my research with the Four Marks of the Catholic Church.

The Four Marks of the Catholic Church are four words that basically describe our Catholic faith. As a community, we are One, Holy, Catholic, and Apostolic.

One – Existing, acting, or considered as a single unit, entity, or individual.*

We are ONE family. But we are more than a family; we are a family united under the King of the Universe. We are a royal family. But unlike most royal families, where the children are neglected and left to be raised by nannies and servants, our Father never leaves us. He is constantly present with us, and never abandons us when we need Him. He gave us gentle Mary to be the mother of us all. She is a great queen; much loved and adored by the heavenly angels, and us, her children here on earth. Jesus Christ, Prince of Peace, is our brother, loyal friend and counselor. And all of us here on earth, we encourage each other and keep each other strong as only brothers and sisters can do. Wow, and people say our family of five kids is big…

Our family all shares ONE common belief. No matter where you go in the world, a Catholic Mass is always the same, only possibly in a different language. We share the Twelve Beliefs of the Catholic Church, which are stated in the Apostle’s Creed. It’s so cool to know that all the way across the world, the same readings are being read, the same Gospel proclaimed, and everyone is receiving the same Jesus.

“We are many parts, we are all ONE body, and the gifts we have, we are given to share. May the spirit of love make us ONE indeed. ONE, the love that we share; ONE, our hope in despair; ONE, the cross that we bear…” – (“We Are Many Parts”, by Marty Haugen 1986 GIA Publications)

Holy – Dedicated or devoted to the service of God, the church, or religion.*

God is holy. We are created in God’s image, therefore, we are holy. But not only are we just created that way, we Catholics are following God as closely as we can. Our Church was actually started by Jesus Christ, and once He ascended into heaven, He left the Church to Peter. In the Gospel of Matthew after Peter declares that Jesus is the Messiah, Jesus says to him, “Blessed are you, Simon son of Jonah! For flesh and blood has not revealed this to you, but my Father in Heaven. And I tell you, you are Peter and on this rock I will build my church, and the gates of Hades will not prevail against it.” (Mt 18:17-18)

So, we were created in God’s image, then we joined the Church that Jesus Himself started, and we try our best to go by His laws and commands. But by no means am I saying that we Catholics are perfect. No, we are human; nothing we do will be perfect. It is simply impossible. No full-blooded human was, is, or ever will be perfect; the only exception is Mary the Mother of God, who was created without sin. It would be impossible to be holy if God hadn’t given us the opportunity, but He did, so we try our best to do it.

Catholic – Universal in extent, involving all; of interest to all.*

What does it mean to be Catholic? Well, the word “catholic”, as stated above, means universal. But when you’re talking about the Catholic Church, then you’re talking about a religion; a religion that is universal — there’s not a single country in the world that doesn’t have at least one Catholic. But that’s not the only reason it’s called universal, it’s also called that because you can go anywhere in the universe, attend a Catholic Mass, and it will be the same words, the same Bible readings, the same Consecration and the same Eucharist as if you were back at home.

But being Catholic is so much more than being “universal”. There’s a reason that Catholicism is universal, I mean, in order to be all over the world, and have existed for more than 2,000 years, we must have done something right. So, what do we have that makes us different from the Jews, Muslims, Protestants, and other religions? Let’s start with the Eucharist.

The Eucharist is not just bread and water. When Jesus instituted the Eucharist on the night of the Last Supper, He broke the bread, then gave it to His disciples and said “Take, eat; this is my body.” (Mt 26:26) He then took the cup and said “Drink from it, all of you, for this is my blood of the covenant, which is poured out for many for the forgiveness of sins.” (Mt 26:27) He also said “Do this is in remembrance of me.” (Lk 22:19)

We take Holy Communion every time we go to Mass, unless there is a mortal sin on our souls. Our Holy Communion, the Eucharist, is different from Protestant communion, because we believe that the bread is actually transformed into Jesus’ body during the Consecration. And then the wine likewise becomes the Blood of Christ. This is called Transubstantiation. We remember the Last Supper, and take Holy Communion at every Mass because Jesus told us to. When He said “Do this in remembrance of me” He meant all of us. His body and blood are a symbol of the covenant He made with us. He would give His Body and Blood so that our sins could be forgiven. All we need to do now is ask for His forgiveness, which leads us to another sacrament that is unique to Catholics: confession.

Confession is one of the main things about Catholicism that people frequently don’t understand. Why on earth would you want to tell somebody else all the things you’ve done wrong? Why would you put yourself through that humiliation?

Well, there’s a great explanation. When we go to confession, we tell the priest our sins. Now here is the best part; if we are truly sorry for what we confess, then our sins are forgiven. And by going through this sacrament, we receive graces from God that help us not to sin again. It won’t take away our free will, we can choose to sin again, but if we call on God and ask for His help, then He will help us to stay clean and pure of heart. As Saint Isidore of Seville said “Confession heals, confession justifies, confession grants pardon of sin. All hope consists in confession. In confession there is a chance for mercy. Believe in it firmly. Do not doubt, do not hesitate, never despair of the mercy of God. Hope and have confidence in confession.”

Apostolic – Of or characteristic of an apostle.*

The last of the Four Marks is “apostolic”. Now, Jesus left the Catholic Church to His apostles. But what does that have to do with us today? It has almost everything to do with us today. Peter, James, John, and the other original apostles are now dead. By the laying on of the hands, their apostleship has been passed on to our modern-day bishops. So technically, the Church is still guided by apostles, therefore, we are still an “apostolic” Church.

There they are, the Four Marks of the Catholic Church — the basis of what we stand for, and what we believe.

Notes:
* These definitions are from dictionary.com