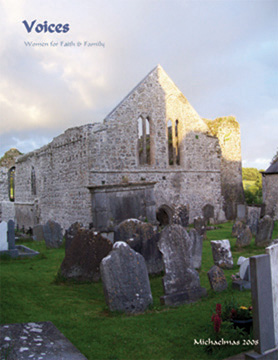 3.... Inside Voices: On the Present Position of Catholics in America -- by Helen Hull Hitchcock

5.... "If you knew the Gift of God" -- WFF's Day of Recollection on Mulieris Dignitatem

6.... The Battle over Contraception and Its Significance -- by William E. May

8.... The Four Marks of the Church -- by Anna Gareis -- Voices Young Writers Award

11... How to Decide the Moral Issues in Voting -- by Joseph Ruwe -- Voices Young Writers Award

16... What Mulieris Dignitatem Revealed to Us -- by Josephine Robinson

19... Saint Francis de Sales quote from the Preface to Introduction to the Devout Life

20... Mulieris Dignitatem [Chapter V.12 "Jesus" was printed in this issue]

30... On the 40th Anniversary of the Encyclical Humanae Vitae -- Pope Benedict XVI

31... The Battle for the Human Person: Reflections on Humanae Vitae -- by Margaret M. Whitehead

40... God in My Garden: Meditations at Season's End -- by Mary Jo Anderson

42... Putting Faith in Technical Expedients: Forty Years of Contraception has Validated Sexual Incontinence as the Norm -- by Rita Joseph

Cover: The front cover is the Franciscan Friary of St Thomas a Beckett founded in 1252 by David Og Barry in Buttevant, Co Cork, Ireland -- Ruins of a Country Church - Buttevant, Ireland, by Helen Hull Hitchcock

Feast of Saint Michael and All Angels - September 29

Saint Michael Archangel, defend us in battle.
Be our protection against the wickedness and snares of the Devil.
May God rebuke him, we humbly pray;
and do thou, O Prince of the Heavenly Host, by the power of God,
thrust into Hell Satan and all the other evil spirits who prowl about the world seeking the ruin of souls. Amen.+

Most Sacred Heart of Jesus, Have mercy on us.
In the Name of the Father and of the Son and of the Holy Spirit. Amen. +