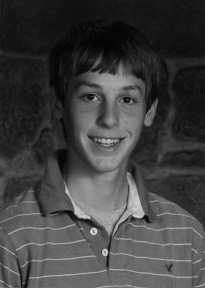 Renold Sossong is a junior at Bishop Carroll High School in Ebensburg, Pennsylvania. Renold enjoys being involved in drama, forensics, and Pro-Life Club. He is also a member of his school’s Students against Drunk Driving and Student Activities Club. Outside of school Renold is involved with his school youth group, and is also a very active member of 4-H. Renold plays spring and fall soccer for Bishop Carroll as well. After graduating from high school, Renold would like to pursue a career in law.

Today was like almost every other day. My mom woke me up just as the sun was coming up over the trees. I had to go with my dad today to the market. As we walked there he told me stories about how when he was a child he lived further out from town and when he used to go to the market he walked the far distance by himself both ways. I asked him if he ever got scared when he was walking through the woods and he told me his answer. He explained that when you are young you could very easily get scared over little things that are not even anything. He said that when he would get scared he would sit down and say a prayer to the oak tree that it would protect him from the weather and that he would pray to the eagle god for protection from any other dangers.

When we got home from the market, mom was sitting out under a sheet that she had hung for shade. She called me over and began to tell me a story. The story was about some guy and his band of men who went to tell a story to a big group of people. I don’t really remember it because I was paying more attention to the dogs playing in the yard.

But, I guess when it came to snack time, the guy had forgotten his snacks. When he realized what he had done he went and asked all his friends if they had any food, and no one did. Then, if I understood it correctly, he took one boy’s food and had this band of men distribute it. Even though it was only a few fish and a couple of loaves of bread, all the people there ate all they wanted. I think that was a pretty cool mackerel or whatever my mom called it.

But after a while her story got boring. I don’t know, I’m just glad that my dad said I don’t have to listen to her stories if I don’t want, because they are just frivolous magic. I hope that one day I can learn how to do cool tricks like the guy in the stories that my mom tells me.

This morning I was awakened by a bucket of water being poured on my face by someone I had never seen before. I thought to myself, what kind of bold person would be so daring as to dump cold water on a sleeping man? As I stood up and began to stumble down the road, all I could think about was the immense pain in my head. After a couple of hours I began to feel a little better and what had happened the night before began to come back to me.

Although many of the details are still not clear, I can remember that last night around dusk a group of my friends came over and we hung out around my house for a while. A little later we went for a walk, which conveniently ended us up by one of the big parties of the weekend. When we arrived there I can remember that there were a lot of people at the house, but the only person I was looking for was Sarah. She and I had been talking and getting to know each other for some time now and when I did finally find her, we went and got a drink. This is when things begin to get a little blurry. I got my drink and when I had downed my first, or fifth, she started giving me hers, telling me that it was too much for her to finish. After that all I can remember is spending the rest of the evening in Sarah’s company.

This is a normal occurrence for me, going out and getting so messed up that I cannot even remember what goes on. For some reason these activities leave me feeling empty, but it is all that I know. I really wish that I could find something that would actually leave me with some feeling of importance — a feeling that shows I have a purpose, and that I am not just sitting here, doing what I do day after day. But I do not know what it is. I have read Aristotle and listened to the words of Plato and they don’t do it either. I just don’t know what it is.

Today my eyes have been opened. This morning I was awakened from my room and went to city market to get my day started. As I was walking on my way to the school here in Milan, I ran into my friend Anthony. Now Anthony, unlike me, is a believer in most of the philosophical ideas that are an up-and-coming trend in this and surrounding cities. I, unlike he, would rather not pay attention to them. But anyway, he told me he was going to hear a local Christian bishop speak. I was somewhat humored when he told me the reason he wanted to go was to make fun of his teachings. He asked me if I would like to go along and since I did not have to be at work for a while, I said I would like to walk along with him.

When we got there the building was packed. My first instinct told me that they were all there to mock the man as well. They were all talking and carrying on conversations about many different things and were making quite a lot of noise. From a door in the front of the room I saw a short bearded man walk in. Once he got to the front of the room he raised his hands — and just as quickly as a bird flies off — the entire group was silent.

He began speaking, and told us all about the One True God. Now, this was nothing original. At every street corner there was someone claiming to be the “one true god”. But it was the energy with which he said it that added credibility to what he was saying. He told us about a God that loved His children so much that He offered to sacrifice His only Son so that we may all one day live with Him.

After he had finished, many people — including Tony — began to laugh and then walked out. But for some reason that I do not know, I stayed, and after a few moments this Bishop Ambrose walked back to me and began telling me more about God. For some reason, I know for a fact that this is the truth and that we all have a specific job or mission on earth. I now know that mine is not teaching languages and speaking but rather my mission is to spread this good news that I have been given.

Today is probably one of the happiest days of my life. After much deliberation I have been named the bishop of my hometown of Hippo. Now, I do not know why God thinks that I would do a good job as the bishop, but apparently He thinks that I will. I am but a meager servant and am in no position to question the actions of my Lord, my God. I do not think that I am any more fit to serve God as bishop than anyone else in His kingdom, but for some reason He has chosen me. Now, looking back on the events of the day, I have to laugh when they announced that I was going to be the next Bishop of Hippo. Everyone gathered jumped for joy, except me. I was more scared than happy. Although most feelings come and go, this feeling of fear has not yet left me, but I know that God will lead me through the times that lie ahead.