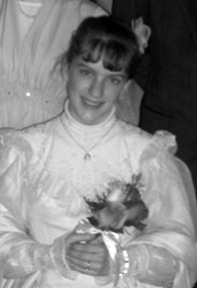 Sarah Halbur is 15 years old and a sophomore at Saint Francis of Assisi Homeschool Academy. She resides in Joliet, Illinois, with her father, mother, two sisters, and a brother. Sarah enjoys acting, graceful dancing, homemaking skills, and playing with small children. She wrote this essay on the Holy Father for religion. May his holiness and wisdom inspire us to lead faithful lives for Christ. (Editor’s note: Sarah is also the artist of the sketch of Pope John Paul II below.) 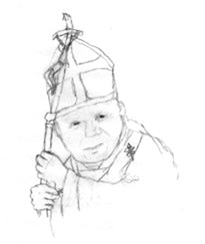 Anticipation hung in the air as the white smoke billowed from a chimney above the Sistine Chapel. On this 16th day of October in 1978, thousands of people gathered in Saint Peter’s Square, and waited in tense excitement. Who would be the new Vicar of Christ?

As he stepped out onto the balcony of San Pietro, people gasped in surprise. The 400-year chain of native Italian Popes was broken! The new pope was Polish -- Karol Wojtyla. The new Successor of Peter greeted the world in perfect Italian.... “Brothers and sisters, your new pope is not Italian, so you will have to help him with your language….” Everyone was surprised and cheers rang out. They loved him already.

One of the youngest cardinals ever selected as pope, the new Holy Father then greeted the World with his now famous and beloved words -- “Be Not Afraid!” Raising his hand, he bestowed his first papal blessing.…

Karol Wojtyla’s Early Life
Fifty-eight years earlier, on May 18, 1920, in a small home in Wadowice, Poland, anticipation had also hung in the air as Karol and Emilia Wojtyla awaited the birth of their new baby. The proud parents called their second son Karol, after his father. Mr. and Mrs. Wojtyla were devout Catholics. They loved their two sons dearly and taught them the Catholic Faith.

When Karol was just nine years old, tragedy struck their household. Karol’s mother died while giving birth to a baby girl. After the loss of his mother and baby sister, Karol developed a close relationship with his father. As a youth, Karol did well in school and greatly enjoyed literature, drama, and writing poetry. When Karol was 12, sadness again struck the Wojtyla household. Karol’s older brother, Edmund, died of scarlet fever. Once again, Karol’s relationship with his father deepened.

In 1939, a different type of tragedy struck … the outbreak of World War II and the Nazi invasion of Poland. This time, the entire country shared their sorrow. Karol had been part of an acting group he had begun with some of his friends. The Nazis no longer allowed them to perform in public so they continued in secret in the homes of the group members.

The biggest and hardest blow of Karol Wojtyla’s life was about to come. One afternoon, on arriving home for lunch, he found his father dead of a heart attack. Now all alone, young Karol turned to God more than ever before.

After much prayer and discernment, he began studying for the priesthood. Because the Nazis had made it illegal to enter the seminary, Karol studied in secret. At night he would study theology and in the daytime work in the German factories. One day, the Gestapo arrested all men between the ages of 15 and 50 to work in their labor camps. Through the grace of God, Karol escaped and was able to continue his priestly studies.

Finally World War II was over and the Nazis were defeated. The Polish people could not rejoice for long, however, for their beloved country fell into the hands of Communism.

Karol was saddened to see his homeland degraded by the atheistic Communists. However, he kept his ambition and soon his study and hard work paid off. He was ordained a priest on November 1, 1946.

Father Karol Wojtyla did amazing work for the Church. Since the communists made both praying the Mass and attending it illegal, Father Karol would say Mass in secret. He would take groups of young boys on camping trips and teach them the Faith. They would go swimming, hiking, skiing and kayaking. Many times, they would stop in the middle of a wooded area, form two oars into a cross, flip over a kayak for an altar and celebrate Mass. Had Karol been discovered by the Communists, it could have cost him his life, or many years in prison. But God had other plans.…

Father Wojtyla was eventually consecrated a bishop and then, on May 7, 1967, Pope Paul VI named him cardinal and Archbishop of Krakow.

Karol Wojtyla becomes Pope John Paul II
Eleven years later: In the fall of 1978, after the sudden death of Pope John Paul I, Cardinal Wojtyla gathered with the Conclave of Cardinals to elect a new pope. Who would believe that two days later, he would be the one to step out as the new pope? After the seventh ballot, the cardinals finally came to a decision.…

When Cardinal Wojtyla was told that he had been chosen, and asked if he would accept the role, the cardinal put his head in his hands and wept. How could he be the new pope? After getting over his initial shock, Cardinal Wojtyla realized that it must be God’s Will. He accepted the role and chose the name John Paul II.

The new Rock of Saint Peter turned his papacy over to Our Lady. He designed his new coat of arms with an “M” to honor Mary, the Mother of God. He began writing encyclicals on chief truths and doctrines of the Faith. He began to travel. During his papacy, Pope John Paul II traveled abroad 147 times to personally visit and shepherd his flock the world-over.

On one of these occasions, he returned to Poland, his homeland … as pope. Poland at that time was still under Communist rule, but by the grace of God, he received permission to visit. When the pope arrived, riding through the streets to greet the people, the crowds ignored the fearsome Russians. Millions crowded the streets and showed their love for him. After this, the Communists’ power declined. Eventually and miraculously, without bloodshed, communism fell from power. Poland was free! Free! The citizens once again hung their country’s flag in store windows and on house-fronts. Statues of Stalin were torn down and pulverized. The Communists’ iron curtain was gone.

A Miraculous Survival
After the pope returned home from Poland, the devil was furious … and planned a disaster. On May 13, 1981, the feast of Our Lady of Fatima, while riding outside Saint Peter’s Basilica, our beloved Holy Father was shot by a would-be assassin. The pope crumbled into the arms of two cardinals next to him and his eyes rested on a statue of Our Lady of Fatima. He was immediately rushed to the hospital in critical condition. The Holy Father suffered greatly in the weeks that followed. The pope said he was certain that had his eyes not rested on Our Lady right after he was shot, he would have been killed. As soon as he was strong enough to leave the hospital, the Holy Father did what for most people would be unthinkable. He visited his assassin and granted him forgiveness.

The Holy Father’s health improved and he returned to his normal state of life again. Because of his love for young people, the pope established “World Youth Day” -- a bi-annual event where he could come together with the youth of the world to pray and to encourage them to follow Christ. World Youth Day evolved into some of the largest gatherings of people in human history. Hundreds of thousands of youth would come, chanting: “John Paul II, we love you!”

The last World Youth Day that he attended was in Canada in 2002. The theme he inspired was “The salt of the earth and the light of the world”. During his message during this 17th World Youth Day, he challenged the youth. “You, young people, are the vitality and strength of the Church throughout the world.... The world you are inheriting is a world which desperately needs a new sense of brotherhood and human solidarity. It is a world which needs to be touched and healed by the beauty and richness of God’s love. It needs witnesses to that love. The world needs salt. It needs you -- to be the salt of the earth and the light of the world.…You are our hope, the young are our hope.”

The pope loved everyone and touched the hearts of countless lives, young and old alike. He visited with those such as Mother Teresa and the President of the United States. He held a special place in his heart for the poor and forgotten and especially for children.

The Holy Father also had an unlimited respect for the family and for the dignity of human life. He actively opposed abortion and in his 1995 encyclical, “Evangelium vitae”, the pope explains: “By His incarnation the Son of God has united Himself in some fashion with every human being ... whatever is opposed to life itself, such as any type of murder, genocide, abortion, euthanasia, or willful self-destruction, whatever violates the integrity of the human person … whatever insults human dignity … these poison human society, and they do more harm to those who practice them than to those who suffer from the injury. Moreover, they are a supreme dishonor to the Creator.” Pope John Paul II gave importance not to what the world would call important, but to what God considered important.

As Pope John Paul II grew ever more beloved and close to the hearts of both Catholics and non-Catholics around the world, his health began to fail. Still, his faith never wavered. As he grew more frail and unstable through Parkinson’s disease, he did not lessen his papal duties, but instead, continued on in the service of his Church.

Heaven-bound
As March of 2005 drifted away, so did the remaining strength of John Paul II. The World kept a vigil of sorrow and prayer for this man whom they loved so well. On April 2, 2005, first Saturday and the Eve of the Feast of Divine Mercy, John Paul II received the Last Sacraments. He could hear hundreds of pilgrims outside in St. Peter’s Square, crying and praying for him. He spoke quietly, “Tell them not to weep for me”. Quietly and peacefully at the end of Holy Mass, this man of God went Home to meet his Maker.

During his lifetime, our Holy Father, Pope John Paul II, told us “to remember the past with gratitude, to live the present with enthusiasm, and to look forward to the future with confidence”.He will never be forgotten in the hearts of those who loved him. Nor shall we forget those famous words our Papa spoke to us that first day of his Pontificate: “Be Not Afraid!”

Back to top -- Home -- Back to Table of Contents