The Women Saints of Britain 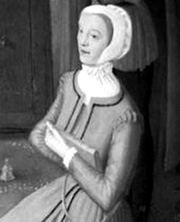 If a group of Catholics in Britain was asked to name some female saints, it is likely that the first names that came to mind would not be British ones. Probably, an initial list would produce names like Bernadette of Lourdes, Thérèse of Lisieux, Margaret-Marie Alacoque, Teresa of Avila, Catherine of Sienna, Claire of Assisi.

But, as an English Catholic, I have become increasingly interested in the women saints who lived in my country, spoke my language, and have a special message for Catholic women today who seek to uphold the Faith amid many pressures. They include Anne Line, Margaret Clitheroe, and Margaret Ward, all martyred during the Reformation period for their loyal adherence to the Catholic Church and the pope. All were canonized by Pope Paul VI in 1970. The first of these, Anne Line, is a Christmas martyr, in that she was arrested on Candlemas Day and met her death soon afterward. And she is a London saint, which strikes a chord with me as a fellow Londoner.

Saint Anne Line
A while ago, a friend contacted me and said, “we ought to find out about Anne Line!” She had learned something of her story and wanted to know more. We set out together by car from my house in the southern suburbs and -- after, I’m afraid, a couple of dreadful muddles -- we eventually arrived at Dunmow in Essex on the other side of London, where Anne, who was martyred in 1601, is honored.

She grew up at Dunmow, the daughter of William Heigham, who was a staunch supporter of Calvinist doctrines, and who disowned both her and her brother when they announced their conversion to Catholicism as young adults. Anne married a fellow convert, Roger Line, but their time together was short, as not long after the wedding he was arrested for attending Mass -- at that time a serious offense -- and exiled. He died abroad in 1594.

Anne devoted the rest of her life to harboring priests and making arrangements for them to say Mass. It is thanks to women of her caliber that the Faith was preserved in England, and the risks she took were great. Eventually, she was arrested when she had arranged for Mass to be celebrated by a Jesuit, Father Francis Page, in her house. It was Candlemas Day, 1601. Tried at the Old Bailey, she was hanged on February 27, 1601, affirming her faith and refusing to express regret at having helped a priest.

Today, there are two churches in Essex named after Anne Line -- both modern and very ugly, but with real devotion to the saint. On our little pilgrimage, we visited both of these, met with great friendliness -- cups of tea, warm welcome from clergy and from various parishioners who were about -- and realized that there is a genuine local cult that reflects a real gratitude for the gift of the Catholic Faith that has been passed on to us.

Saint Margaret Clitheroe
In the north of England, a shrine in York welcomes pilgrims who want to honor the memory of Saint Margaret Clitheroe. “The Pearl of York”, born Margaret Middleton, was the daughter of a candlemaker who was also Sheriff of York. She was not raised a Catholic but became one shortly after her marriage to John Clitheroe, a wealthy butcher. He was not a Catholic, but had a brother who was a priest.

Margaret and John were a devoted couple. In addition to raising their children, Margaret began instructing a number of others in the Faith, and providing facilities for priests, including her brother-in-law, to say Mass. In York, a little house in The Shambles, a butcher’s shop over which the Clitheroe family lived, now honors the memory of all of this.

Eventually, Margaret’s work was discovered and she was arrested. Rather than have her children forced to give evidence against her, or lie in her defense, she chose not to plead before the court, and was sentenced to be pressed to death as a punishment for this. It was a slow and cruel death as weights were loaded on to a board, which crushed her down.

Her courage and faith drew admiration from many, and significance was seen in the fact that the date of her death was Good Friday. Her husband was devastated by her death: “Let them take all I have and save only her, she is the best wife in all England, and the best Catholic”. Their daughter became a nun and both sons became priests.

Saint Margaret Ward
Saint Margaret Ward is a London martyr whose story is bound up with the River Thames and the grim Tower that stands on its banks. She lived for a while in Whitehall and, using her good political and social connections, was able to visit the Tower of London where a priest, Father William Watson, was imprisoned. She made arrangements for him to escape and provided a rope, enlisting the help of a boatman, John Roche.

Roche switched clothes with the priest as part of the escape plan, and Father Watson was able to get away -- but Roche and Margaret were later arrested and imprisoned. Margaret was subjected to a hideous torture, being flogged and hung up by her wrists, her toes just occasionally able to touch the ground, so that eventually some of her limbs dislocated and she became partially paralyzed. After a brief trial, she was executed at Newgate. Her story was recorded partly due to the hero priest Father Robert Southwell, who was later himself to undergo similar cruelties before being hanged, drawn, and quartered.

Today, the place-names have not changed and even the streets still follow the same routes that Margaret Ward, Margaret Clitheroe, and Anne Line knew. The Thames still flows through London past the Tower. But Catholics are free to practice their faith, and the names of these women martyrs ought to be honored by all who share the Faith for which they suffered.

As women, they have a particular message for us, especially in these days when we are frequently told that women should feel oppressed by the Church as they are not able to be ordained as priests. These courageous women martyrs from long ago -- who like us were also busy with homes and family responsibilities, knew that loyalty to the Catholic Church -- to the pope in Rome, and to the truths of an unchanging Faith is fundamental. They did not feel that the Church oppressed them: on the contrary, the truths taught by the Catholic Church were glorious and spoke of eternity, of a covenant made by God with His people and cherished down through the centuries. Now they are enjoying the “Marriage Feast of the Lamb” in Heaven, we could ask their intercession for our work as Catholic women today.

Our present Pope Benedict needs our loyalty and our prayers. No one is going to imprison or torture us for our loyalty to Rome, for going to Mass and for affirming our allegiance to the teachings of our Church.

Sometimes, we may find that we are hurt by attacks on the Church, by media distortions of basic teachings, by insults hurled at the pope, by crude jokes or simply by silly remarks from people who have not bothered to discover what Catholicism is really all about. Before we allow any of this to disturb our commitment to the Faith we might remember the courage of these women martyrs.

Joanna Bogle, a contributing editor of Voices, writes from London. She is a well known author and journalist, who writes and lectures on issues of the Catholic faith, and appears frequently on the radio.

Margeret Clitherow (or Clitheroe) was born in York, England in about 1556, two years before the reign of Elizabeth I began .  In 1571, Margaret married John Clitherow, a wealthy butcher and a chamberlain of the city. Though her husband belonged to the Church of England, he had a brother who was a Catholic priest and Margaret became a Catholic a few years after their marriage.  She hid priests from the authorities during this time of persecution of Catholics. Some of the priests were martyred.

On March 10, 1586, Margaret was arrested for harboring priests, attending Mass, etc. She refused to plead, as the only witnesses against her would be her own young children and servants, whom she could not bear to involve in the trial. She was condemned to be pressed to death. “God be thanked, I am not worthy of so good a death as this", she said. Although she was probably with child at the time, this horrible sentence was carried out on March 25 (Feast of the Annunciation), 1586. She was laid on the ground, a sharp stone beneath her back, her hands stretched out in the form of a cross and bound to two posts. A door was placed on her, which was weighted down with stones until she was crushed to death. Her last words during an agony of fifteen minutes, were "Jesu! Jesu! Jesu! have mercy on me!"

Her sons Henry and William became priests, and her daughter Anne entered Saint Ursula’s convent in Louvain, Belgium. The biography of Margaret Clitherow, was written by her confessor, John Mush.

She was canonized by Pope Paul VI in 1970 as one of the forty martyrs of England and Wales.  Her feast day is March 26.