The Little Lily of Purity

Katherine Buckmaster, winner of the Michaelmas 2002 Voices Young Writers Award, is the eighteen-year-old daughter of Dr. and Mrs. James Buckmaster of Henderson, Kentucky. The eldest of eight children, she has been home-schooled since fifth grade, taught by her parents in the Kolbe home-school program. Last year Miss Buckmaster visited the home town and the grave of Saint Maria Goretti, which inspired the following essay written for her English fourth quarter work. She plans to work with the National Evangelization Team during the coming academic year, helping to give retreats to high-school-aged youth. She is considering college and is also discerning a vocation to the religious life. - Editor

Just imagine. You're the daughter of a very poor widow. You have four younger siblings and an older brother. You must take care of your siblings, clean the house, cook the food, do the mending, and do anything a full-grown woman is expected to do, though you are only eleven years old. Your mother and brothers work out in the field all day with the neighbor and his son. Life is hard.

Your mother, often frustrated and under pressure, regularly breaks into tears. For almost two years now, your father has been dead, and your mother, while dealing with her grief, must continue to struggle to support her children. You would not want to put any more pressure on her than you have to.

To anyone else, this may seem a dismal childhood, but little Maria was glad to help. She found joy in offering up her little sufferings to Jesus, and staying close to His mother, Mary. She was the youngest in her First Communion class, but she knew all her catechism by heart. When the priest asked her what she had requested of Jesus after receiving Him, he expected the usual answer: "I asked for a position in the army" or "for a husband that will not drink". Maria's response surprised the good priest. "Oh, Father", she said. "I just asked to receive Him again!"

Even at her young age, Maria seemed totally absorbed in doing the will of God in every little detail. She helped her brothers and sisters with their catechism, and tried to do her best in all her household duties. The baker in Nettuno had a pet story about Marietta, as everyone called her. One day she was in his shop on an errand for her mother. The baker gave her a cookie as a treat. She thanked him kindly and slipped the sweet in her apron pocket.

"Aren't you going to eat it?" the baker asked.

Maria shook her head. "The little ones will enjoy it", she answered, thinking of her younger siblings.

Satan, however, can never tolerate a pure soul. He set to work on a plan. The neighbor's nineteen-year-old son, Alessandro, was to be his instrument. Alessandro was addicted to pornography. Satan used this to tempt the teenager with impure desires for Maria, and Alessandro started to approach the eleven-year-old girl.

The first time, Alessandro came across Maria by herself in the field. He confronted her and made his wishes known. Maria was horrified, and ran away before the troubled youth could force himself on her. "Don't tell your mother or I'll kill you", Alessandro threatened. Maria didn't know what to do. If she told her mother, her mother would confront the boy's father, who was their partner on the tenant farm. Maria's family would have to leave, causing her mother more worry and sorrow. No, she could not tell her mother, but what could she do? Maria found herself constantly on her knees, praying for protection.

There were several more incidents. One time, Maria even had to throw a bucket of water over Alessandro's head to get away. Maria's mother noticed her daughter's unease at being left alone, but never suspected the real reason for it.

July 5, 1902 proved to be a hot day. All the children went out to help Alessandro and their mother in the fields. Alessandro's father was taking a nap under a shade tree. Teresa, the baby, had fallen asleep out on the stoop, so Maria took her mending out of the stuffy house to catch what breeze there was. It was just another day.

Then, Alessandro made an excuse to go to the house. No one suspected his real errand. Coming to the house, he forcibly dragged little Maria inside after him. Pulling out a dagger, he threatened to kill her if she would not give in to his wishes.

Enraged by her words, Alessandro struck. The knife came down fourteen times. The child fainted; he thought she was dead. Locking himself in his bedroom, he took a nap, leaving the dying girl in the kitchen.

The noise awakened baby Teresa. Her cries woke Alessandro's father. He grumbled into the kitchen to investigate the reason for the incessant crying. He stopped suddenly to see Maria lying in a heap. Within minutes, the girl's mother was at her side.

The trip to the hospital in a horse-drawn ambulance over a dirt road was intolerable, but Maria barely moaned a complaint. The doctors were surprised she even survived the trip. She was not allowed any food or drink because infection might set in. However, she received Jesus in Communion after her last Confession.

The priest asked her if she forgave Alessandro. "Yes", she said, painfully enunciating the words, "and I want him to be in paradise with me one day".

She died during the early morning of July 6.

Alessandro, however, was far from wanting to join her in heaven. He remained unrepentant and received a thirty year prison sentence. He hated Maria, and blamed her for his fate. Then, eight years later, she appeared to him in a dream.

Smiling graciously, she handed him lilies, which symbolize purity. Not only were the flowers lilies, but there were fourteen of them - one for each time he stabbed her. Awakening from the dream, he called for a priest and confessed his sins.

Alessandro was released from prison early because of good behavior. He went immediately to visit Maria's mother, who was now a housekeeper for a priest.

"Will you forgive me?" he asked Maria's aging mother.

Mrs. Goretti smiled. "Alessandro, Maria forgave you, God has forgiven you, and I too forgive you". On Christmas Eve, Mrs. Goretti and her daughter's murderer received Jesus in Communion side by side.

Alessandro helped immensely in the investigation of the case for Maria Goretti's canonization. He was there with Maria's mother and siblings when his young victim was declared a saint in 1950.

Alessandro finished his days as a handyman for a Caprician monastery. As he laid on his death bed, he wrote a chilly warning to all people to avoid pornography in books, magazines, movies, and any other source. He told of the haunting consequences it led to for him.

July 6, 2002, commemorated the centennial of Saint Maria Goretti's martyrdom. Pope John Paul II, in a letter to Bishop Agostino Vallini of Albano, in whose diocese rests the shrine of the young martyr, wrote: "Maria Goretti and many adolescents, who in the course of the centuries have paid with their martyrdom for their loyalty to the Gospel, are beside [today's youth] to fill their souls with the strength of remaining constant and faithful. In this way they can be sentinels of a radiant dawn, illuminated by hope".

Saint Maria Goretti, pray for us! 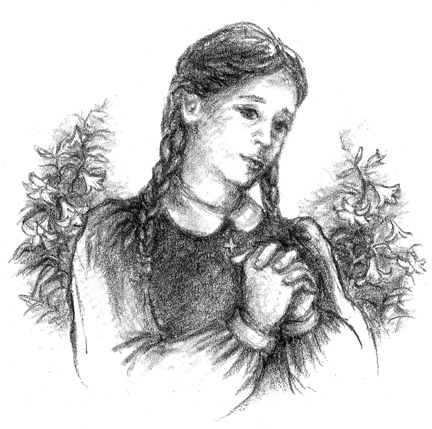